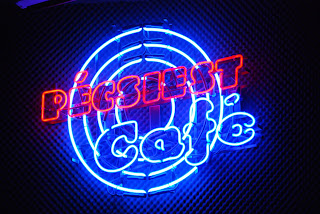 The Pécsi Est Café was the venue for Dawnstar's concert on 10 April 2010. The café is located in the heart of Pécs, a town in southern Hungary.
In 2010 Pécs had the honour of bearing the European Capital of Culture-title besides Essen and Istanbul. That year marked a dramatic moment in the life of the city. New cultural spaces and forums were created, new perspectives were opened up for the exponents of various forms of art, new programs and all-art festivals were organized.
Among these programs were the Fringe Festival which was organized in Pécs for the first time. Some of the Fringe Festival's concerts were held at the Pécsi Est Café.