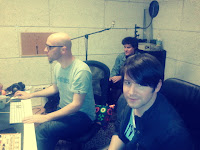 We are very pleased to share this long-lasting happiness with you that after spending five months with recording we successfully finished our new album, entitled Saturnine Valentines. David Schram as the mastering/mixing engineer and also as a non-official producer facilitated us to find the exit from the never-ending maze of the recording.
We started the recording at the Abnormal Studios in August 2012 and then we continued at the Dürer Studios with David Schram. We recorded eight songs for this record among which one song is an instrumental one and we are quite satisfied with the outcome. We also learnt a lot from David, who demonstrated an encouraging and highly professional attitude throughout the recording.