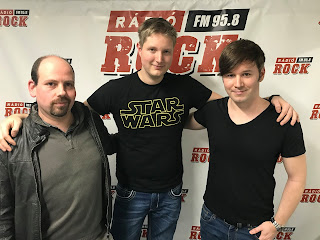 Last night you could hear an interview with the band. Now we are able to say a bit more about the interview since it was aired and we do not spoil the radio broadcast.
So on 26 November 2016 Ádám Rédl interviewed us on Rádió Rock 95.8. The interview took place at the headquarters of the Radio Rock at Ázsia Center in Budapest.
Attila Wind was informed on 18.11.2016 by Anita Fazekas-Csauth about the possibility of an interview and he immediately accepted  the invitation. Attila Wind informed the other band members about the possible interview. Unfortunately, Viktor Albert could not go to the interview because of his work. Finally, only Bálint Hamvas and Attila Wind could attend the interview.
At the beginning of the interview, Ádám Rédl talked about the schedule of the interview and asked some questions about the history of the band which was previously sent by the band in a PDF format to the radio station. First, Ádám Rédl asked about the formation of the band and he also showed interest in the change of the band's name from Ansellia to Dawnstar. He was also amazed about the fact that how the band stayed together for so long. Ádám Rédl was also interested about the first official concert and the first EP, Change The World. However, the main part of the interview was concentrating on the bands latest release, Saturnine Valentines. The interview was interrupted 5 times when 5 songs from Saturnine Valentines were aired during the show: Love's Gonna Be Tender, Ophelia, Almost Every Flame Will Fade Away, London Nights, and In Heaven We Meet Again. In addition, the band was asked to choose a Hungarian act which had an influence on the band. Attila Wind and Bálint Hamvas opted for Amber Smith's Hello Sun.
Stayed tuned and come back later to listen to the interview.
Email ThisBlogThis!Share to TwitterShare to FacebookShare to Pinterest
Labels: interview
Newer Post Older Post Home
Members
Viktor Albert - Bálint Hamvas - Attila Wind