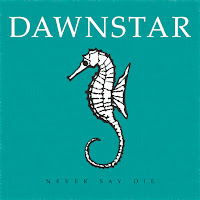 Never Say Die is a song by Dawnstar. It is the opening song on the eponymous EP, released on 30 March 2002. The song was written bx Wind in 2000 for the band's first demo, Vanity Star. It was first recorded for Vanity Star between 27th March and 1st April 2000. However, the band decided to rerecord it for the new demo. Wind changed the lyrics for the Never Say Die demo. There are several versions of the lyrics.

Don't leave me once anew
All day I dream of you
And now thou aren't away
I'm not down night and day
Email ThisBlogThis!Share to TwitterShare to FacebookShare to Pinterest
Labels: never say die, song
Newer Post Older Post Home
Members
Viktor Albert - Bálint Hamvas - Attila Wind