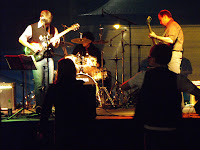 We debuted in the Austrian capital, Vienna 6th June 2009 at the Donaukanaltreiben Festival. Although the show started one hour later as planned, it was an amazing experience for us playing abroad for the first time. We started off with our new song The Eighth Deadly Sin which was a very wild entry with full of unexpected turns. The next song Don't Die A Martyr For Me could sound familiar to 'fans' from MySpace. Another debutant song was In Heaven We Meet, which was dedicated to Attila's father. The energetic gig reached its zenith by another new song Live Today, which was written just couple of weeks before the concert by the band. As a surprise the Italian ballad Giulia followed the dynamic string of songs. The penultimate song was one of our best songs called Scarlet, a song about a whore from Budapest. The concert was finished with another new song entitled London as the icing on the cake. All in all, we were extremely delighted to play at this festival and we are looking forward to come back once again.

Dawnstar at the Donaukanaltreiben Festival