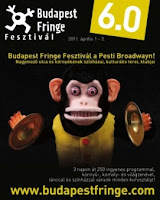 We are delighted to announce that we are playing at the Budapest Fringe Festival on 1st April 2011. The venue of the show is going to be the Rocktogon, located in the heart of Budapest. This gig is going to be our third appearance at the Fringe Festival, followed by the first concert in 2007 in Budapest and the second in 2010 in Pécs. As usual, the show is going to last for half an hour.
Email ThisBlogThis!Share to TwitterShare to FacebookShare to Pinterest
Labels: fringe festival, news
Newer Post Older Post Home
Members
Viktor Albert - Bálint Hamvas - Attila Wind