We are extremely delighted to announce that the band is heading to the Abnormal Studios, located in Budapest, in order to start the recording of the band's sophomore album. We are planning to record seven new songs among which four were written in 2012, while the remaining three songs (In Heaven We Meet Again, London Nights, and Live Today) you might have heard in concerts. We opted for Laszlo Philipp as a recording engineer, who previously helped the recording our first EP, Change The World. On 13 August Viktor is going to start recording the drums and then the bass with Balint and then the guitars with Attila. The keyboards and the vocals are going to be recorded later. 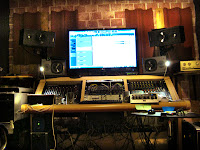