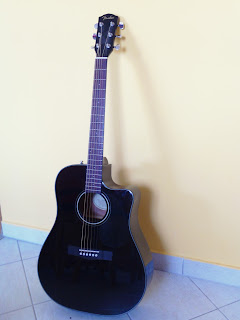 The Fender CD-60CE was Wind's acoustic guitar from 2012 to 2016. He purchased the acoustic guitar on 9 August 2012 for 63,800 HUF at Coda Hangszerbolt.
Wind used the acoustic guitar during the recording of Saturnine Valentines for two songs: Almost Every Flame Will Fade Away.
He was not completely satisfied with the guitar because he could not really use it for concerts since it was difficult to tame. In addition, during the recording the guitar seemed to be out of tune and it was almost impossible to tune it perfectly.
However, Wind sold the Fender guitar on 30 march for 40,000 HUF on the Internet.
Email ThisBlogThis!Share to TwitterShare to FacebookShare to Pinterest
Labels: attila wind, gear
Newer Post Older Post Home
Members
Viktor Albert - Bálint Hamvas - Attila Wind